What is a Baker’s Cyst? 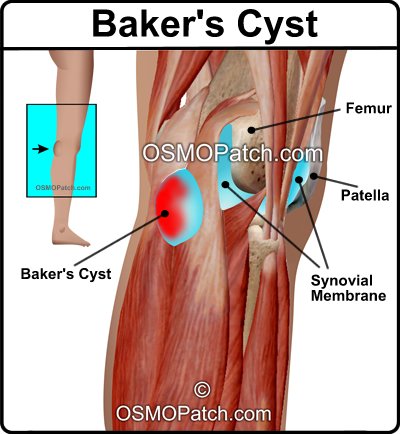 A baker cyst is a painful condition which can be characterised by swelling in the back of the knee.

This swelling occurs due to inflammation in the synovial joint which encapsulates the knee resulting in the out-pouching of fluid into a little balloon type sac from the synovial lining.

When this condition develops, synovial fluid (which is normally contained in a tough capsule that encases the knee joint) collects in the baker’s cyst and bulges behind the knee.

This is also called a “popliteal cyst” as it directly affects the popliteal region of the knee (that shallow depression located behind the knee joints).

If left untreated it is possible for it to rupture. A ruptured baker’s cyst may then cause the collected synovial fluid to transfer and travel down the calf muscles of the legs. This can then trigger rapid swelling and discomfort of the leg which may then cause further complications.

What Causes a Baker’s Cyst?

Baker’s cysts are quite common and can be caused by nearly any joint-related inflammation. Some of the most common causes may include;

A baker’s cyst is also know as a >> popliteal cyst

What are the Symptoms of a Baker’s Cyst?

If left untreated a baker’s cyst may actually rupture. A ruptured or burst baker’s cyst can cause a lot of pain and discomfort and can present very similarly as a blood clot as there will also often be calf related pain.

How is a Baker’s Cyst Diagnosed?

It is always best to visit a qualified medical professional if you suspect that you have either a baker’s cyst or feel that your baker’s cyst may have ruptured or burst.

Your doctor will likely require you to have an ultrasound which will be able to confirm a diagnosis of baker’s cyst and also importantly rule out or alert the doctor of any existence of a blood clot.

If there is an infection suspected then a blood test and maybe an aspiration of the synovial fluid may be required for testing and culturing. In some cases an x-ray and or MRI may also be required to rule out any co-exist conditions that may have contributed to the condition.

Next Page: Learn the answers to the most common questions asked about treating a baker’s cyst, including:

I had a sac of fluid to the upper-right of my knee. Quite large. Initially I had pulled my calf muscle and without realizing the extent of the pull, I continued to pursue my daily routine which consisted of morning workouts at the gym including “spin” class.  Needless to say, I aggravated the whole situation. […]

Hi I ordered these patches for my son who has terrible bursitis in his knee. He owns a carpet installing business and the constant kicking has really damaged his knee..He took meds..had steroid shot…nothing worked…The doctor told him he needed surgery… I had found your patches on line and they have worked for him. Thanks […]

Hi, I have used your patches with great success for a bursa that I got when I was thrown from a horse. I have used it also for my husband’s knee. Thanks

Dear Toky, Some time ago I corresponded with you and was duly sent 10 patches to try for bursitis of the knee. As I am a Carmelite Nun, our life is dedicated to prayer so kneeling is rather important!!    I kept off the knee for a long time before trying the patches and found it […]

Dear Danniel, I fell 1.5 metres onto the road, landing on my patella. The pain was severe, and after two weeks on crutches I was left with a fluid-filled bursa the size of half a golf-ball on my knee. I already had a swelling just below my kneecap for five years, and another specialist had […]

Dear Friends at MediWise, I had what a nurse practioner at St. Thomas’ Hospital in London called ‘that huge bursa’ on my right knee as a direct result of falling from the top of a railway staircase when the city was inundated with a snowfall and resulting ice.  I received your patches the day before […]

Hello Jasmine, I just wanted to say that my husband has been using the patches for a few days now and they have definitely made a difference to his knee, I have brought some more from one of your UK stockists, The Health Workshop, and they, like you, could not have been more helpful. Thank […]

Many thanks Toky….they were fab last time and its now been over 6 months since I have had to use them. Alas it seems my bursitus is back, so hence the need for the wonder patches……I got a bit careless with kneeling on my knee, so all my fault.